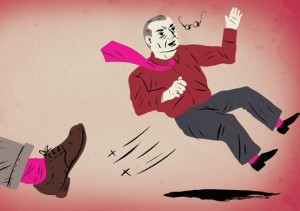 If I had to guess, I would say that I am probably unanimously disliked by every Debt Settlement company who is a member of TASC and USOBA and pretty much most of those who are not.  Spend 5 minutes on my blog and you will know why.  I call it like I see it, and what I see is a whole bunch of bullshit programs ripping off consumers.  What really gets me going though is when these guys pretend that what they do is actually helpful to consumers in debt.

That being said, I am going to offer any Debt Settlement company that is a member of TASC or USOBA some helpful advice.  Will they take my advice?  Probably not, but most of them are going to go out of business if they don’t.  Do I care about that?  Nope, not a bit, don’t let the door hit you in the a** on the way out!  If I don’t care if they go out of business, then why am I offering them advice?

It is no secret that I think TASC and USOBA are actually the cause of most of the problems in the debt settlement industry.   Every day I have to read these press releases coming from these organizations who are the self proclaimed industry regulators and I just sit there and say “that’s bullshit and here we have some more bullshit, and wait this is, nope that’s also bullshit, and then they wrap up basically saying “in conclusion regulators suck, we rule, go team.”  I have this recurring nightmare of Ansbach pumping his pom poms and it is freaking me out.

I have been writing for quite awhile about how I felt these guys are much more interested in protecting debt settlement companies than they were in protecting consumers in any meaningful way.  Now however, they don’t even try to pretend.  They are out and upfront with the fact that protecting their upfront money to the detriment of consumers is their priority.  I could point to 100’s of examples but I will just give you 2 from this week.

The FTC just passed a law that would ban debt settlement companies from charging front loaded fees.  They have been ripping off consumers with this fee model for years, and not only has TASC and USOBA never done a single flipping thing about it, they actually promote this as the only way to do business!  So the FTC finally has no choice but to step in because of the overwhelming evidence gathered over many years, showing that there is no question consumers are getting ripped off by the boat load.

Ok, so what is my great advice for members of TASC and USOBA?  Pull the freaking plug already.  Stop paying your membership dues and funding this ridiculous behavior.  If you don’t pull the plug on these guys, I can promise you one thing, they will put you out of business.  If you are crying in your soup about an advance fee ban from the FTC, just let TASC and USOBA keep running off at the mouth and give the bill currently sitting in congress a reason to get passed.  You know the one that will also cap fees at potentially 5 or 10 percent of what consumers save.

If a simple upfront fee ban puts you out of business, then good, you should be out of business because you have been running your business like Charles Ponzi and you should count your blessings that you are not going to jail, where some of you belong in my opinion.  However, if you are a legitimate company, and provide a good service for consumers, you should really not have much of a problem with the new FTC rules, but I want you to think about what a very restrictive fee cap would do to you.  Ya, that would keep any legitimate business person up at night.

Personally, I feel the advance fee ban from the FTC was absolutely necessary to clean the crap out of the industry and it alone will clean up a lot of the major problems.  However, I feel that a restrictive fee cap that takes all the profit incentive out of the industry would be absolutely detrimental to consumers, which is where my interests lie.  There is a fine line between regulations that clean out the bad guys, and regulations that clean out everyone.

TASC and USOBA members, I am talking directly to you.  Think about what has happened in the last 6 months. Has TASC or USOBA helped you or made it worse for you?  Of course you are told to blame the FTC but think about why the FTC was forced to do what it did. Take a hard look past Ansbach’s pom poms and think about what is going to happen if they keep taunting the regulators with their bullshit.  They know the front loaded fee model is bullshit for consumers, the regulators know it and even though you like it and won’t admit it, you know it is total bullshit as well.

TASC and USOBA should have seen this advance fee ban coming a long time ago and taken action to self regulate the industry before the FTC had no choice and imposed a total advance fee ban.  Isn’t that why you pay them thousands of dollars a month?  Aren’t they supposed to be protecting you and staying on top of these regulations?  Heck I saw this coming over 2 years ago.  If you don’t mind wasting thousands on membership dues for nothing, why don’t you send some of it my way? I will at least give you a heads up when you are about to get hit by a truck instead of telling you to just sit there because I think it might turn.

I feel that consumers and ironically legitimate debt settlement companies would be much better served if TASC and USOBA ceased to exist.  They could actually serve a valuable purpose if they were honest about the real problems in the industry and took proactive action to help correct them.  So far however, from what I can tell, they are betting on a loser by sticking to this ridiculous front loaded fee model is beneficial to consumers argument and are committed to riding it all the way back to the barn, regardless of the harm caused to their members.

TASC and USOBA members can ignore my advice at their own peril, but mark my words, if you give these two trade organizations enough rope, they appear to be perfectly willing to hang you with it.

2 Responses to “Free Advice to Usoba and Tasc members, get out or you will be put out on your ass”